Tendons in Grasshopper - Warning no. 600

Hello,
for the first time I’m working with the interface between Sofistik and Rhino/Grasshopper and I have some problems with the prestress.
Within sofistik, here is the warning no. 600 during the calculation of the tendon:

This warning is given for the full length of the tendon and thus, no tendon is visualized. According to this post about the warning 600 in the sofistik-forum (Tendons definition error), I changed the length of the tendon and the element size of the slab, but the warnings still arise.
For simplification, I created a simple model of a prestressed slab with only one tendon in Rhino/Grasshopper and in Teddy. The Teddy-Code with the tendon is working. Therefore, I compared the two codes with each other. I only found a difference in the creation of the axes. In Rhino/Grasshopper there is a structural line (SLN) which changes in an axis. In Teddy I create an axis out of a polyline. I don’t find anymore differences.
Can someone help me, why the model out of Rhino/Grasshopper doesn’t work?
Thank you very much in advance! 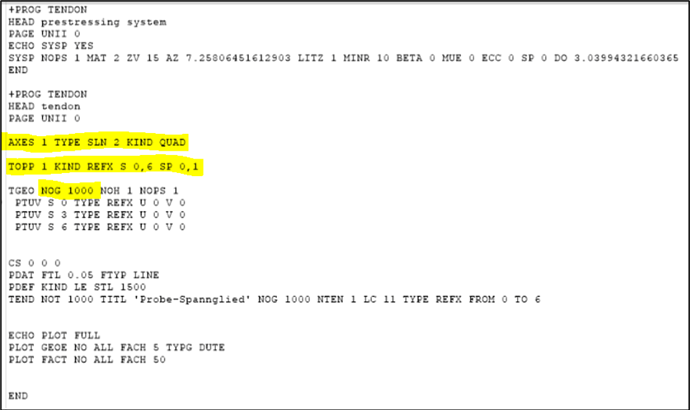 Visualization of the Rhino/Grasshopper script (there is no tendon by fading out the slab):