I am experiencing some difficulties in calculating the eigenfrequencies of a bridge model I’m creating, of which the .dat Teddy file is attached. In this .dat file, I have a self-made script on the one hand (“Sofimsha: Model creation from self-made script”) and an automatically generated script based on a Sofiplus model on the other hand (“Sofimsha: Model creation from auto-generated script from Sofiplus”) that generate the exact same structure, yet the resulting eigenfrequencies are not the same, as can be seen in the image below, and after investigating it for hours and hours, it’s a mystery to me why this is the case. The first eigenfrequency for instance differs by almost 5%, which is quite significant and raises questions about the trustworthiness of either of the results. 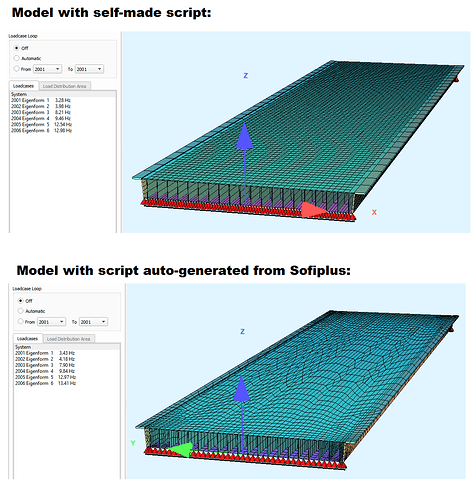 The boundary conditions (supports), materials, geometry and thicknesses are all exactly the same. The only difference seems to be the mesh of the model. In the model generated by the self-made script, all quad elements are rectangular, whereas in the automatically generated script the quad elements have irregular shapes. I’ve already tried refining the mesh in my self-made script which is possible with a few parameters (e.g. #nr_of_long_sect), but this didn’t seem to have any impact on the eigenfrequencies, which I think implies that the mesh is already fine enough to produce accurate results.

To help find the cause of this issue, I created a few variables (#create_uf, #create_lf, …) under the ‘Generate plates’ title which can be set to 0 or 1, with which the creation of certain parts of the model (in both Sofimsha programs) can be turned off or on respectively. In the image below, I only had the lower flange generated, which is just a simple flat plate, but there were still (small) differences in the higher modes, which seem to get larger as more plates are generated. 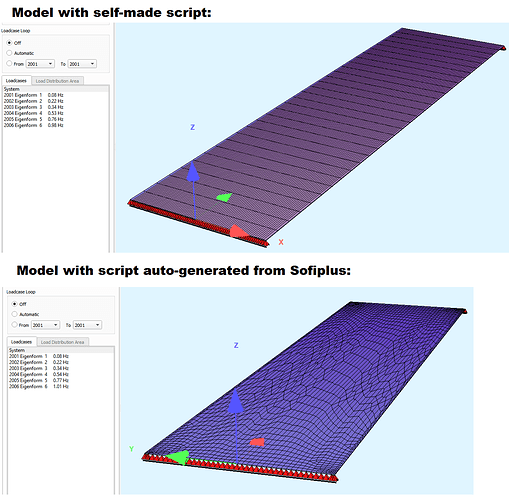 My best guess is that the shape of the mesh elements has something to do with it, meaning that rectangular elements with relatively constant sizes are somehow less suited for accurate calculations. But that’s only because that seems to be the only difference between the two models. Any help would be greatly appreciated, because I’m really baffled at how the differences can be so large for seemingly identical models.

To perform tests with this script, the two Sofimsha scripts in this file should be intermittently turned on (+) or off (-), so that only one of them will run any given time the script is run.

The difference is the meshing (as you mentioned yourself).
Natural frequencies and deflections can be quite sensitive to mesh size.

Also in your “self-made script model” the elements along the edge are very large and do not have the same number of nodes as the surrounding structure. This means that surrounding elements are connected and the edge elements “jump this gap”.

I would recommend to script the model in sofimshc instead.
-> You model areas and can control meshing on a more global level.

Thank you for your quick response, sfr. I will take your advice and use sofimshc for future projects, although for my current project I’m already too far progressed and won’t have enough time to switch over. Either way, I’m glad to learn that a high sensitivity to the mesh size is the cause of the discrepancy.