Hi everyone!
I was just hoping someone could help with this query, I have been working on a bridge model and have has to add prestressed tendons into the longitudinal beams. I have a seperate loadcase for the prestressing and now have to combine this with other loads i.e live loads, dead loads and wind loads.
I have tried using the “combined loads” and the “analysis of combined loads” for this task however, it is saying that there is no loads defined for my prestressing loadcase.
For example, the self weight loadcase looks like this,

This behavior is strange. Have you checked whether the prestressing loads are applied in the combined load case?

How did you generate the prestressing forces?
Did you follow the same steps as outlined in our online bridge design tutorial?

Apart from that you can use the CABD Tasks in the SSD for supperpositioning bridge loads.

Hi Fredrerik,
I have created tendons in sofiplus using spline geometry and added them to a curvature loadcase. 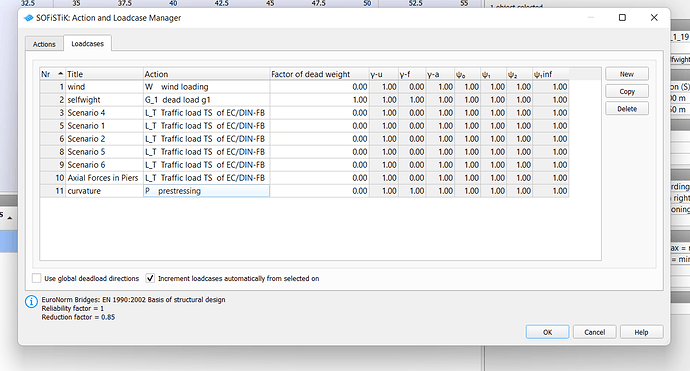 image1274×686 58.5 KB
However when I try to add this loadcase into any load combination, it simply does not add the curvature load case.
I have also tried the CABD superpostitioning but it says that the tool is not supported within my desing code
JFH November 22, 2022, 11:03am #5

Please watch the video series I sent you.
The tutorial describes all aspects of the workflow for a prestressed concrete bridge.

I have now carried out the construction stage task however I am unsure on how to get the prestressing behaviour into the load combinations, as I have various traffic and wind scenarios to analyse