I would like to present the purpose and methodology of the simulations I’m creating in SOFiSTiK so that I may perhaps learn from feedback from anyone who might be interested.

I am aiming to investigate the effect of the human-structure interaction between pedestrians and a relatively light bridge type of fiber-reinforced polymers, particularly their damping effect on vibrations of the bridge. Humans are known to have this damping effect because of the material they consist of, as opposed to for instance a bag of sand with the same mass, which would have no damping effect. As such, humans can be characterized by a spring constant and damping coefficient of which values can be found in literature.

In my model, I add a custom number of pedestrians modeled as single-degree-of-freedom systems on top of the bridge (i.e. a nodal mass connected to the bridge by a spring-damper). A structure like this also has its own structural damping regardless of the pedestrians, which I implement in the SOFiSTiK model as Rayleigh damping by calculating the alpha and beta coefficients from the natural frequencies and damping ratio of the bridge, which are all known values. I do that with the following records in the DYNA program: 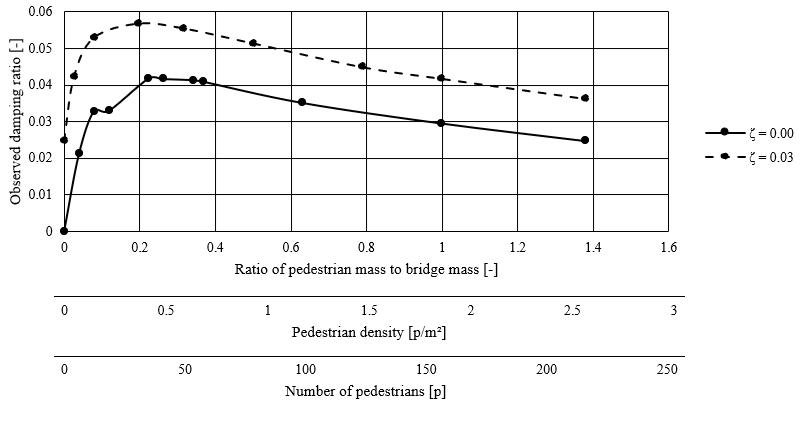 If anyone has thoughts or feedback about my approach, I’d be happy to hear it! My file is also added below: